Olivier Da Lage is the Editor-in-Chief of the radio station RFI. Considered one of the best experts in the Gulf region where he lived for three years (more precisely in Bahrain), he is the author of several books on the subject such as "Qatar, the new masters of the game", (collective work), Demopolis, 2013, "Thirty years that shook the Persian Gulf, Éditions du Cygne, 2011" and "Geopolitics of Saudi Arabia”, 2nd edition, Complexe, Brussels, 2006. He is also a specialist in India and has just published "India, Desire for Power", Armand Colin, 2017. He agreed to answer questions for L’Observatoire du Qatar.

You said last Monday evening at the conference on the crisis in the Gulf held in the French Institute for International and Strategic Affairs (IRIS), Paris, that the withdrawal of the United States from the Iran nuclear deal was responding to a "plot". Could you clarify your own position on that?

Even a successful plot, I would say, which had been implemented by the coalition formed by Israel, Saudi Arabia and the United Arab Emirates. Saudi Arabia had discovered very late the existence of secret negotiations between Iran and the Obama administration extending over many months in the Sultanate of Oman, without Riyadh having been informed.

Oman still pays for Saudi resentment for having been kept out of a negotiation that Saudi Arabia disapproved of anyway. That is why when, after the signing of the nuclear agreement in Vienna on July 14, 2015, Saudi Arabia publicly approved. But actually they just paid lip service and everyone understood it, Riyadh did not really feel strong enough to openly oppose America. It was about to change in the months to come. Israeli Prime Minister Benyamin Netanyahu, for his part, has never hidden his hostility to this agreement and President Obama. He even invited himself in March 2015 to the Congress of the United States (without even informing the Obama administration) to make sure the US parliamentarians oppose this text that had not yet been signed, but to no avail.

Also, the United Arab Emirates, or more particularly Crown Prince Mohammed bin Zayed (MbZ) although much more discreet, represent an essential actor as it is the link between the other two. The UAE ambassador in Washington is actually the keystone of this strategy. As a matter of fact, meetings were held between him and Israeli officials during the months that followed. They share common enemies: Iran, and to a lesser degree, the Obama administration, on nearing the end of his term of office. MbZ enlisted Saudi Crown Prince Mohammed bin Salman (MbS) in the operation.

The three men decided to bet everything on the candidacy of Donald Trump, who had not been chosen by the Republican Party yet at that time. But after the Republican Convention, and especially after the election, they were finally able to rejoice as their man was at the head of the world’s greatest power. During the previous months, they "coached" Trump's campaign team and had the satisfaction of hearing in his mouth the very words that appeared on the arguments they had themselves elaborated. President Trump withdrawing the United States from the agreement on May 8, 2018, showed the culmination of these efforts and an effective strategy between the three countries. At this point, we can not talk anymore of an "objective alliance" but just a mere alliance, because it is now assumed.

You also mentioned the involvement on this issue of the United Arab Emirates and Saudi Arabia, which are on the same wavelength as Israel. In your opinion, what are the factors that explain this unusual new axis Tel Aviv-Riyad-Abu Dhabi? How far could it go?

First and foremost, hostility to Iran. Add to this for the two Arab leaders, total disinterest for the Palestinian cause. They see Israel as a modern country, a "Start up nation" of which there is much to learn and which can help them to modernize their country. Mohammed bin Salman, for example, recently authorized Air India to cross its airspace for direct connections between New Delhi and Tel Aviv. It being, given the persistent hostility among public opinion, it is difficult to imagine diplomatic normalization in the current circumstances. Proof is that the day after MbS gave very favorable statements to Israel and hostile to the Palestinians during his US tour in March-April, his father king Salman concluded “Jerusalem Summit” held in mid-April, in the city of Dhahran.

In your opinion why is the strong man of the UAE, MbZ, "snobbing" Washington right now and, at the same time, ostensibly going to Moscow?

Because the US administration is trying to put pressure on him and on MbS as well for that it normalizes its relations with Qatar, but for the strong man of Abu Dhabi, there is no question of it. The reason is Trump is now convinced that the unity of the six monarchies of the Gulf is essential to his policy of hostility to Iran. But things are not moving in that direction.

You have reported information from the Anglo-Saxon press a drastic drop in foreign direct investment in Saudi Arabia. Can you detail them?

Forbes magazine, based on data published by UNCTAD, revealed on last June 7, that foreign direct investments in Saudi Arabia had fallen from $ 7.5 billion in 2016 to only $ 1.4 billion in 2017 (amounted to $ 12.2 billion in 2012). Mohammed bin Salman’s call to invest in Saudi Arabia, who was by the way traveling in Europe and the United States in March-April, and more generally his announcements for the three last years, obviously have not enhanced investors confidence at all.

You said that Saudi Arabia is in the process of boycotting Germany because Berlin does not subscribe to the bellicose policy towards Iran and Qatar. What is the reality of this boycott? In the same way, with this attitude, does not Arabia risk to blacken more its reputation with Western opinions?

German opinion and officials have been very critical of MbS’s policy. A report of the secret services, the BND, had even been published in 2015 (the mere fact that it was made public is in itself extraordinary). MbS's policy was described as "impulsive" and "interventionist". More recently, Germany decided in January 2018 to stop arms deliveries to parties at war in Yemen. In practice, only Saudi Arabia was targeted. This was obviously badly received in Saudi Arabia where an unofficial but real boycott of German products started. Saudi Arabia’s reputation is already ruined and the enormous sums spent on communication campaigns will not change anything.

Do you see in the short term a way out of the crisis around the Qatar blockade?

In the short term, no. In the medium term, either. In the longer term, who can predict it?

Thank you very much for accepting this interview. 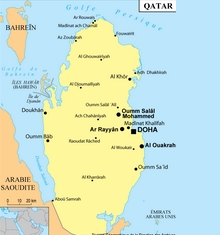